Now that Parliament is no longer prorogued and with the 31 October BREXIT date looming, Midlands Zone carried out a snap Brexit poll at the end of September to see what the LGBT community are making of it all - and the results make for very interesting reading indeed!


We asked pollsters how they had voted in the 2016 referendum and 2017 general election. We discovered that the LGBTQ community vote in both instances had been extraordinarily similar to the actual outcomes (within a couple of percentage points difference of the actual results). So in asking the community about the future, there’s every reason to suppose that our poll, while not scientifically based, may well provide a fairly accurate reflection of what the entire LGBTQ community feels.

And what’s clear from the results is that the Midlands LGBTQ community is just as divided as the rest of the country on the issue of Brexit.


So exactly what does the poll suggest gay voters want now? Well, revoking Article 50 or a NO DEAL Brexit appear to be the favoured options - indicating that people’s opinions are hardening to each end of the spectrum. And even if there were to be a confirmatory referendum, gay voters and the country would still, by all accounts, be split more or less down the middle.

Whether it be 48% versus 52% in either direction, Brexit has certainly created more division than anything else in our recent history - and it will still be the single most important issue on people’s minds when voting in the autumn general election, according to our poll.


Even though a compromise deal is the least favoured or likely option, it might well be the only tangible way of putting Brexit behind us, healing the divide and trying to unite the country again.
Otherwise, Brexit is set to linger on for many years to come - whether Article 50 is revoked or we leave with a NO DEAL Brexit.

Whilst our exclusive LGBT poll was predominantly about Brexit, it was the voting intentions in an inevitable general election this autumn that revealed the most interesting results - especially for the Liberal Democrats and the Brexit Party.


It showed evidence that Brexit could well have broken the two-party system whether a deal is passed by 31 October or not. How the British public voted in the general election in 2017 compared to how gay pollsters voted in our snap September poll was pretty similar: 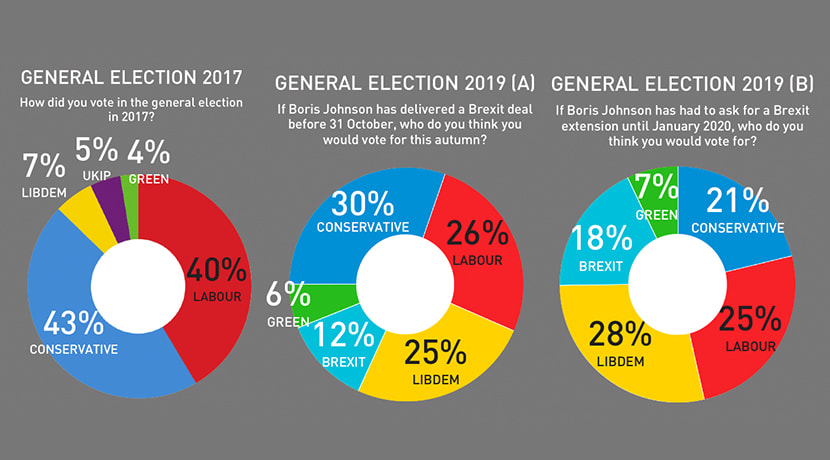 LGBT voters in our poll appear to be backing the LibDems in far greater numbers, in the hope that Article 50 will be revoked altogether and Brexit stopped. Similarly, LGBT voters who want to leave the EU will turn to the Brexit Party in greater numbers if Boris Johnson doesn’t get the Brexit divorce agreement over the line by the end of this month. In any event, it’s hard to see how any party will command an overall majority.